At last night’s session of the citizens’ police academy we learned about police communications, felony car stops and SWAT. In Boulder County a simple code system is used rather than the more complex systems in some parts of the country. For example, Code 0 is danger and code 2 is a traffic stop. Felony car stops involve arresting one or more people in a car who are suspected of committing a felony. Three police cars are placed in a triangle formation to cover the suspect’s car. One at a time people in the car are order out, handcuffed and placed in the back of a patrol car. Members of SWAT (Special Weapons and Tactics) go through extensive initial and ongoing training (approximately 240 hours a year). In dealing with a hostage situation the priorities of life are in this order: 1. Hostage, 2. Witnesses/bystanders, 3. Other officers and support personnel, 4. SWAT members, 5. Suspect.
Posted by Mike Befeler, author of geezer-lit and paranormal mysteries at 9:32 AM No comments:

What a difference a day can make. 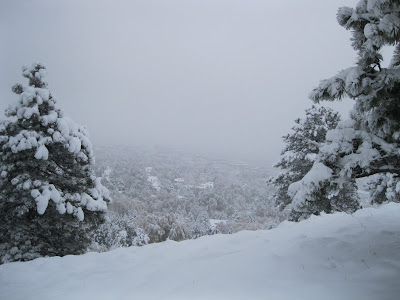 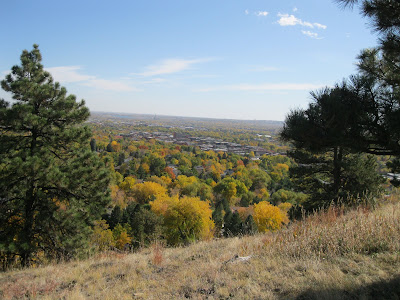 Tuesday was sunny and warm with the autumn colors shining in Boulder. Wednesday a blizzard hit with a foot of snow. Quite a contrast.
Posted by Mike Befeler, author of geezer-lit and paranormal mysteries at 3:56 PM No comments:

We all start encountering interesting blips of memory as we get older. Here was one that happened to me. I was in my home office updating my financial records with mileage traveled for an author event presentation that day but couldn’t remember the mileage, so I went out to the garage to look at the odometer. When I came inside, the phone rang and after taking the call, I returned to my office and began working on a writing project, completely forgetting about the mileage (this is what my wife and I refer to as the intervening thought). Twenty minutes later I saw my expense folder and recalled that I needed to update the mileage. But by then I had forgotten the mileage amount I had seen on the odometer, so I had to go back out to the car a second time to look at it. At least this time I recorded it while I remembered and before another event interrupted me.
Posted by Mike Befeler, author of geezer-lit and paranormal mysteries at 9:03 AM No comments:

Citizens Police Academy - next round

Last night at the citizens’ police academy, we heard from a crime scene investigator. One interesting tidbit—a DNA profile can now be determined from as little as ten cells from a suspect. The second speaker covered animal control. An owner of a dog can be cited if a dog attacks or approaches in a menacing manner even if it doesn’t bite. The third speaker was a school resource officer. She described the importance of knowing the schools and the students. She deals with teenage drama all the time. A minor can be interviewed as a witness or a victim without a parent present, but there needs to be a parent present if a minor is a suspect and rights are read.
Posted by Mike Befeler, author of geezer-lit and paranormal mysteries at 9:51 AM No comments: 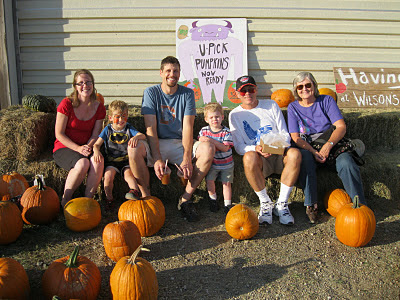 I took a break from writing to go visit our son, daughter-in-law and two grandsons in Iowa. We visited an apple farm, bought goodies, went on a tractor ride and got a picture of the family with pumpkins. Now it’s back to writing in the morning.
Posted by Mike Befeler, author of geezer-lit and paranormal mysteries at 7:19 PM No comments: