Have you played pickleball? It’s the fastest growing sport in the country and an enjoyable activity for all ages and abilities. Four courts can fit inside a regular tennis court. It’s played with a paddle and wiffle ball.


I came to pickleball after tennis and platform tennis. I played competitive tennis as a kid and in college, but after my joints became creaky, I converted over to the smaller court of platform tennis while living in Colorado. After moving back to Southern California, I began playing pickleball regularly.


I have two published sports mystery novels. The first, Court Trouble, features platform tennis in Boulder, CO, and the second, Paradise Court, is a pickleball mystery in Maui. Both have the same protagonist, Mark Yaeger, a retired entrepreneur. If you enjoy mysteries that keep you guessing and give you a few chuckles, you’ll get a kick out of these. 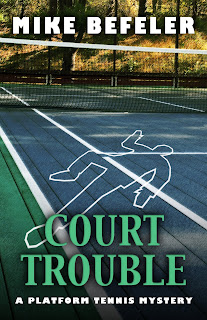 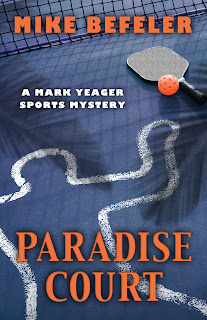 How Political Should Authors Be?

The question of how political authors should be has been on my mind lately with the turbulent political environment and the mass shootings. Most of my blog and Facebook posting are about writing and activities with my grandchildren. Some authors don’t post anything political and others post almost everything that is of a political nature.


My main focus will continue to be on family and writing. But there are issues that are so important I can’t ignore them. Gun violence is one of these. I will make statements as I deem necessary to try to move the discussion forward on what action should be taken.
Posted by Mike Befeler, author of geezer-lit and paranormal mysteries at 5:00 AM No comments:

When I began writing in 2001, I started with short stories. Living in Boulder, CO, where the University of Colorado is located, I learned that the university allowed anyone over fifty-five years of age to take classes for free with the instructor’s permission. I availed myself of this opportunity and took two semesters of fiction writing. In these courses we wrote short stories and critiqued each other’s work. Next, I decided to get some of these short stories published. After 111 rejections, I sold my first short story. Along the way, I also switched over to novel writing. I have periodically written short stories, but the majority of my writing has been focused on novel-length manuscripts. I have published a handful of short stories but sixteen books.


The other morning I awoke from a dream with an idea for a short story. I sat down that morning and wrote a first draft. That’s one of the beauties of short stories. I can often flesh it out in one sitting. Then I went through a number of revision passes. It’s now complete.


I will continue to write short stories. They are a challenge to write crisply and concisely. But my major writing goal is to continue to have novels published.
Posted by Mike Befeler, author of geezer-lit and paranormal mysteries at 5:00 AM No comments:

Enough. Here’s my manifesto. As a parent, grandparent, voter and writer, my perspective is it’s time to address the plague of hate-based gun violence. When I turn on the television news or open the newspaper every morning, I cringe at the latest examples of domestic terrorism. And that’s what it is. These aren’t acts caused by an invasion of foreign aliens. No, these are home-grown, primarily young white men who are alienated from their communities and join a tribe spewing hate of others. We need to address the causes of this plague. Let me frame this in the terms used by crime writers: motive, means and opportunity. These perpetrators are motivated by hate. Their means are readily-available assault weapons with large magazines. The opportunity is everywhere since we are an open society. The solution can be framed in these same three terms. We must embrace a motive of making this a better place for our children and grandchildren through inclusive communities that embrace diversity and take action. We have a means of using our democratic right to vote; to vote against the politicians who hide behind donations from the gun lobby, say nothing and do nothing, and to vote for politicians who are willing to listen to the will of the people and take action to stop this plague. Our opportunity is to make this a country where our children and grandchildren don’t have to fear going to school, to a store, to a concert, to a festival, to a place of worship or out on a street because they could be cut down by a hate-based terrorist with an assault weapon. We’ve heard of the police responding within thirty seconds, but still not being able to prevent carnage. Even if we had police on every corner this would not prevent these tragedies. Thoughts and prayers are not enough. We must get to the root cause to eliminate the hate and the too easy access to assault weapons. Many of our leaders are complicit in not standing against ideologies such as white supremacy and not addressing gun violence. Let’s use the power of our vote to state clearly that this is enough.
Posted by Mike Befeler, author of geezer-lit and paranormal mysteries at 5:00 AM No comments:

I just finished reading a thought-provoking book that I highly recommend: The Second Mountain, The Quest for a Moral Life by David Brooks. The second mountain refers to moving past the first mountain in our life of focusing on the self to an emphasis on others through service to the community. Brooks makes a distinction between a tribe (emphasis on the exclusiveness of us vs. them) to a community that is inclusive.


Brooks points out that the first mountain is the building of the self while the second mountain deals with four major commitments: vocation, marriage, philosophy and faith, and community. His paradoxical conclusion is that true freedom is not going it alone but abandoning the self in service to others.
Posted by Mike Befeler, author of geezer-lit and paranormal mysteries at 5:00 AM No comments: