Our son, daughter-in-law and two grandkids have been visiting. We went sledding and down slides at a warm pool, visited the Wild Animal Sanctuary and Casa Bonita, had a pre-Thanksgiving dinner and played numerous games. A wonderful family time.


We can celebrate Thanksgiving on a different day and be grateful for all we’ve been given. May this Thanksgiving bring you joy and happiness.
Posted by Mike Befeler, author of geezer-lit and paranormal mysteries at 5:00 AM No comments:

Bouchercon 2014 in Long Beach, California, was a terrific mystery conference this year. Some of the headliners included Jeffery Deaver, J. A. Jance, Eoin Colfer and Edward Marston. We had ample opportunity to talk with fans of the mystery genre as well as the leading mystery and crime authors.


Here are a few sound bites. On one panel, the moderator asked the panelists at the end, “Are there any last words?” One of the panelists responded, “Are we going to be killed?”


Eoin Colfer described how he like to put things in his children’s books that would make a dad laugh when reading the book to a child. One example was a character named Colin Oscopy. Eoin explained that a father reading that would laugh and the child would ask what is so funny. The father would have to think, “There’s nothing funny about a colonoscopy.”


I had an opportunity to host the Meet the New Authors Breakfast, where we introduced 53 new authors who had their first mystery/crime novel published in 2014. Here’s a picture of the audience. 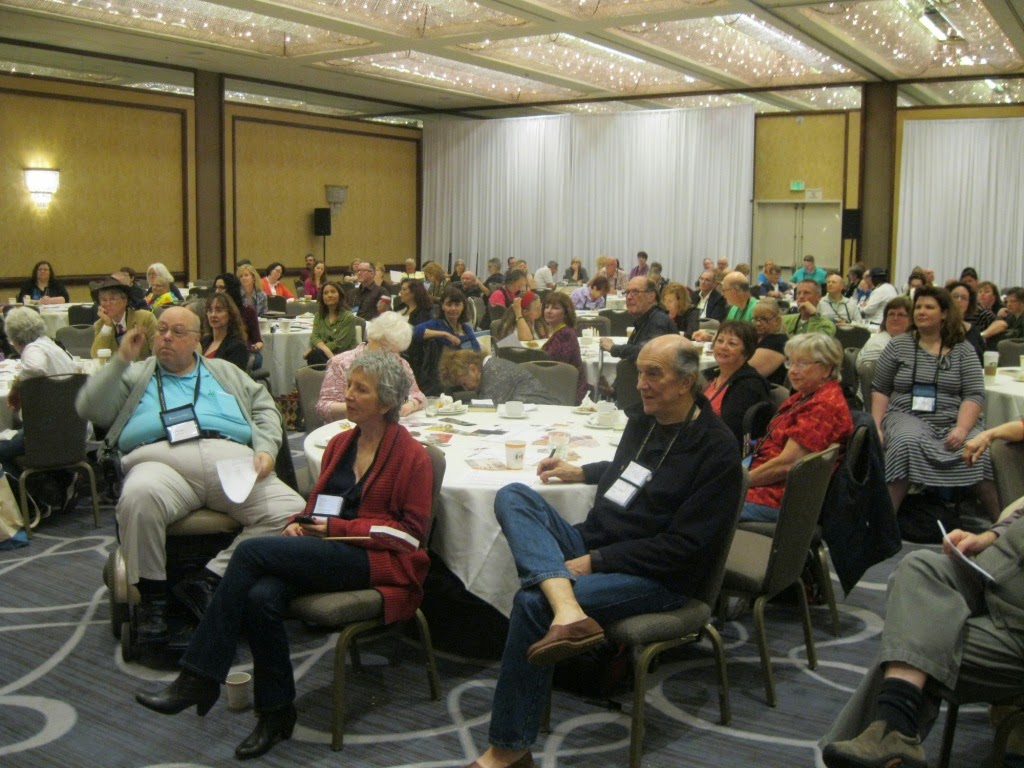 One Sunday morning I took a walk and watched sunrise with the Queen Mary in the distance. 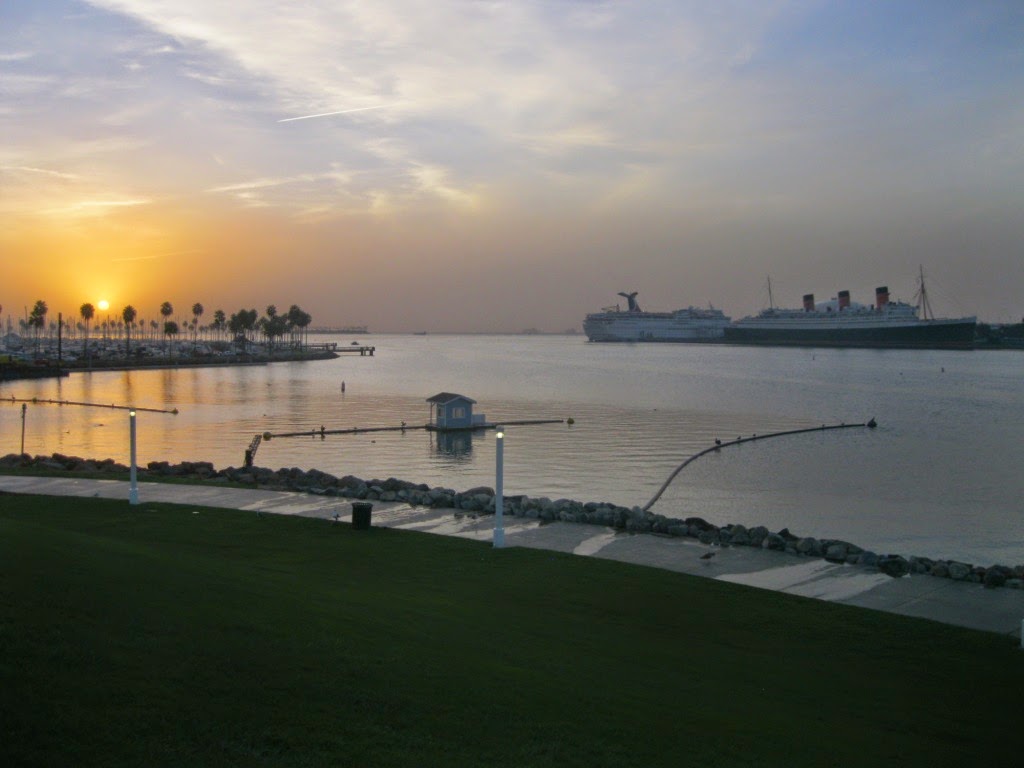 Later that morning, I was on a panel titled Sleuths at Every Age. Here’s a picture with Becky Masterman, me and Thomas Perry on that panel. 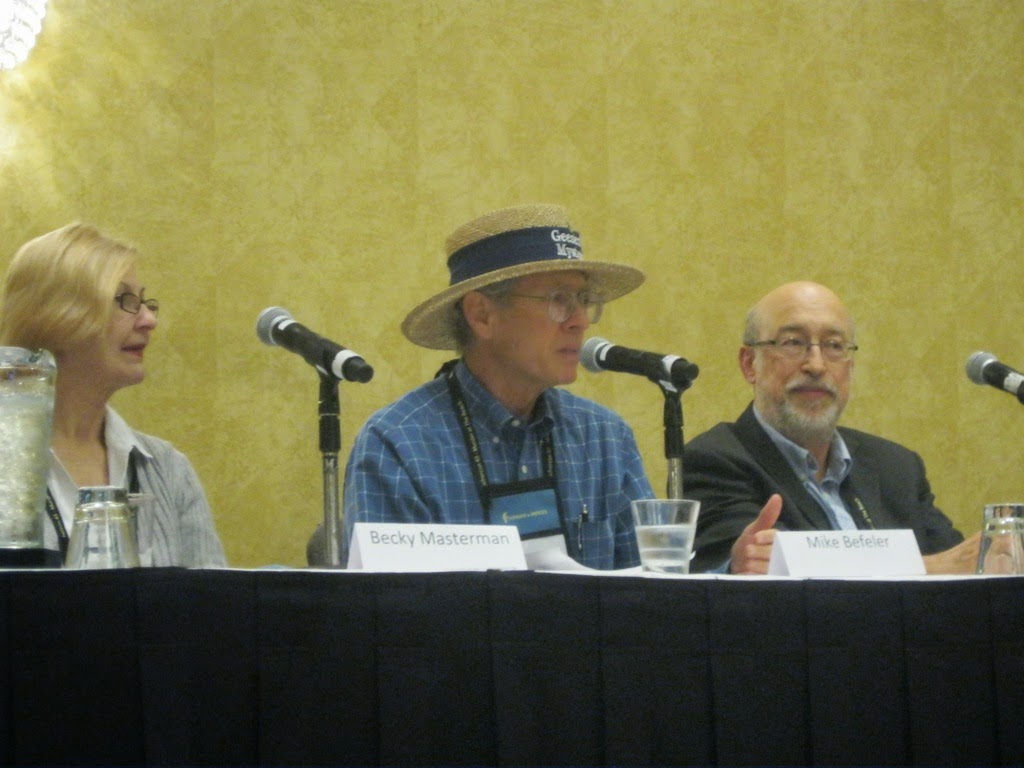 All in all, a wonderful five days. Now back to writing.
Posted by Mike Befeler, author of geezer-lit and paranormal mysteries at 5:00 AM No comments:

Stories That Come My Way

One of the wonderful things about being a writer is the stories and ideas that come my way. A common question that people ask when I give presentations is where do I get my story ideas? The answer: everywhere. I have come up with story ideas from newspapers, television, people I meet, friends and waking up in the middle of the night. A reader emailed me an idea that I used in one manuscript.


Also, when I give speeches, people occasionally share stories and jokes with me.  Here’s one. I was told about going on SKI vacation—Spending, Kids Inheritance.


Then one of my current projects, writing the story of a World War II veteran, came about because a mutual friend introduced us. After hearing his wonderful stories of being an infantryman in Europe, prisoner of war and liberated by the Russians, we began a collaboration.


What I’ve learned—keep the eyes and ears open and enjoy the discoveries.
Posted by Mike Befeler, author of geezer-lit and paranormal mysteries at 5:00 AM No comments:

Communication in the World of Writing--Hello Are You There?

Having spent a 39 year career in business, I learned the importance of responsive communication. To negotiate a contract, close a deal, hire employees, or develop a successful product all required clear and consistent communication. As I entered the publishing world with my first book released in 2007, I found many instances of communication that became one way or nonexistent. I refer to this as speaking into the void.


Here’s one example. Agents used to send form letters when they rejected a writer’s query. A success would be a letter that had constructive suggestions. Now many agents don’t even bother to reply. On numerous web sites agents merely state that if you haven’t heard from them in six weeks they’re not interested. I can understand how this situation came about. Two years ago at a writers conference a literary agent described how her agency had received 36,000 query letters in one year and out of these signed seven new writers. Clearly, they couldn’t respond to all these queries without having a large staff. But from a writer’s standpoint, it’s frustrating to get no reply.


I also hear from publishers that one of the things they look for in authors is the ability to meet deadlines and keep the publisher informed of progress. My experience is that the authors are better at this than many of the publishers.


There are many reasons that writers turn to self-publishing, but the main one is control. When self-publishing, you have to manage the editing, cover art, production and distribution, but these items are under your control. Still, communication and meeting deadlines are needed from people hired to perform services.


On the flip side, in traditional publishing, it’s wonderful to have others bear the upfront expenses and manage the process if there is good communication.


What has been your experience?
Posted by Mike Befeler, author of geezer-lit and paranormal mysteries at 5:00 AM No comments: