Amid all the hustle of the writing life, it was nice to spend two days at the Northern Colorado Writers Conference in Fort Collins this last Friday and Saturday. I conducted two workshops titled, “Rejection Is Not a Four Letter Word,” and “The Art of Balancing Writing and a Full Time Job.” When not teaching, I attended as many other workshops as possible, and as I’ve always found at writers conferences, I came up with new ideas as well as additions to my to-do list. I also enjoyed seeing writing friends and making new ones. I’m very loyal to writers conference since I sold my first published novel through a pitch session to Deni Dietz of Five Star at the Rocky Mountain Fiction Writers Conference in 2005.

In our world of negativity, Mary Roberts put up a board where attendees could write something positive. Here’s a picture: 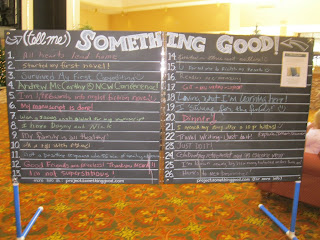 Pass it along. Everyone think of something good.
Posted by Mike Befeler, author of geezer-lit and paranormal mysteries at 1:00 AM No comments:

I have a new mystery novel that has just been published by Oak Tree Press, titled The V V Agency. This is something new for me, a paranormal private investigator mystery. Here’s a little bit about it:

Imagine a dash of Philip Marlowe wrapped in an urban fantasy. The V V Agency is a paranormal mystery that spoofs the PI subgenre and introduces the transvictus—a unique shape shifter.


Van and Vanna run a detective agency, but clients never see them together for a simple reason. A sexual encounter transforms one into the other, and nudity renders them invisible. This presents some interesting dilemmas for his and her love lives, but gives them a distinct advantage when doing detective work. In this, the first book in the series, Van and Vanna take the case of a woman suspected of killing her husband. 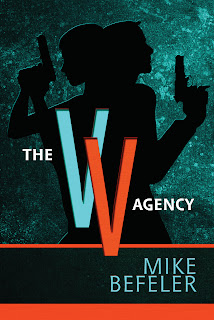 Posted by Mike Befeler, author of geezer-lit and paranormal mysteries at 4:35 PM No comments:

Every April there is a wonderful conference at the University of Colorado called the Conference on World Affairs (this was its 60th year). It goes from Monday through Friday and is free for all attendees with a wide variety of panel discussions. Yesterday, I attended a program titled, Growing Old: The Good, the Bad and the Ugly. Panelist Robert Egger described how we have three options: 1. Look at the now, 2. Look at the future and do nothing, or 3. Look at the future and do something about it. One of the striking statistics he cited: in the United States we throw away 40% of the food we produce. Steve Sauer stated that too often people get wrapped up in a perspective that can be summarized as: Life’s a bitch and then you die. He described an 85-year-old who lamented that when she was young elders were revered but now she feels they’re only tolerated. Lillian Boutte stated we’re never too old to dream. Feargal Lynn said we learn from the wisdom our parents gave us, and as we age, we don’t have to keep messing with the small stuff. One suggestion from the panel was to hold Skype parties for shut-ins so they can stay socially engaged. The bottom line: as we get older we can retool ourselves and become older but not old. I can identify with this as I retired from a career in business into the fiction writing world, something completely different from what I had done for 39 years.
Posted by Mike Befeler, author of geezer-lit and paranormal mysteries at 1:00 AM No comments:

I was out of town for a week including a family vacation and the Left Coast Crime Conference. It has taken me a week to work off my to-do list from those trips. With three books about to be published in the next three months, a number of ongoing writing projects and volunteer activities, it’s been a busy catch up week. The good news. I now have time again to devote to my current writing project—a historical mystery set in Rome in 1656.
Posted by Mike Befeler, author of geezer-lit and paranormal mysteries at 1:00 AM No comments: