Since I decided to become a writer in 2001, all of my published work has been fiction (seven mystery novels and several short stories). In my current writing project, I’m writing the biography of a World War II veteran. This has been a fascinating project and a real learning experience for me. So what are my observations on nonfiction versus fiction?


With my novels I always do at least a preliminary outline. This gives me a roadmap even thought I often take detours to admire the scenery. Since my nonfiction project has relied on recording interviews with the gentleman I’m writing about, I’ve let him tell me his stories and then I’ve pieced them together as I go over the recordings. I let him control the agenda of the early interviews, recounting what he remembered. Then as I began writing, I had a number of questions, so the later interviews have been me asking him questions to get things clarified and filled in.
What is similar between fiction and nonfiction? They both require a good story. I had written journal articles when in the business world, but writing a nonfiction book requires the same attention to story as does a novel. I began writing the episodes recounted to me and then began organizing them in a story arc. Although I first put things down in somewhat of a chronological order, I began diverging from this as I built the story arc. I’ve written 56,000 words, and I’m now doing a read through to see what I’ve got so far.


An interesting process.
Posted by Mike Befeler, author of geezer-lit and paranormal mysteries at 5:00 AM No comments:

I’ve just completed a 2 ½ week break from writing—the most time away from writing since I began in 2001. But I had a very good reason. I spend the time with my grand kids. First, our son, daughter-in-law and two grandsons came to visit us in Colorado for a week. Then my oldest grandson stayed with my wife and me for a second week for Grandma and Grandpa Camp. We hiked, did sticker books, put on plays, went to the dinner theater, saw movies, watched butterlies at the Butterfly Pavilion, attended an air show and spent two days at the hot pools in Glenwood Springs. We wrapped up by flying back with him to his home and spending three days there before his school started.


I spent a few minutes every day checking email and a few social network posts but that was it. The rest of the time was doing fun stuff. Longest vacation I’ve taken in years! 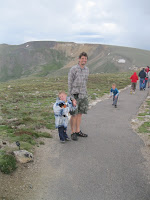 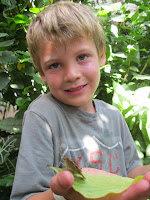 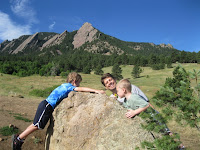 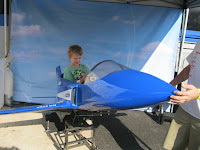 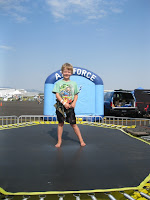 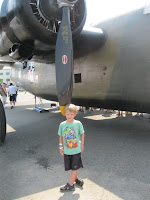 Posted by Mike Befeler, author of geezer-lit and paranormal mysteries at 5:00 AM 1 comment:

After growing up in the sunshine of Hawaii and being outdoors at least some time during the day, most days while living in California and now Colorado, about ten years ago I developed a photic sneeze reflex. What is this you may ask? It goes by a number of names including photoptarmosis, sun sneezing, and my favorite, Autosomal dominant Compelling Helio-Ophthalmic Outburst (ACHOO) syndrome.


Simply put, it’s sneezing when exposed to bright sunlight. It’s estimated that 18-35% of the population has this disorder. I say disorder only in the sense of it being irritating, but there is no serious problem with it unless you’re driving a vehicle and suddenly are wracked with sneezing.


I find that if I go from inside a car or house into bright sunlight without dark glasses and a hat, I will sneeze about three times. As mentioned above, I never had this when younger so don’t know why it started up as I approached geezerhood.


I’ve used this syndrome in one novel I’ve written.


Do you ever sneeze when exposed to bright sunlight?
Posted by Mike Befeler, author of geezer-lit and paranormal mysteries at 5:00 AM 3 comments:

The two lawyers completed their closing statements, the judge gave us our instructions and then it was up to us, the jury, to make a decision. For any of you who have been on a jury, it can be an interesting, boring and difficult job all rolled into one. As a mystery writer, I always want to be called to be on a jury, but because I want to do it, I’m never called. My wife recently received a letter indicating she needed to contact the county courthouse after five p.m. on a Friday to see if she would need to show up the following Monday to be a potential jurist. She did not want to do it, whereas I would have coveted the opportunity. When she didn’t have to go, she was relieved.


So to overcome my jury envy, I signed up to be a jurist in a mock trial. A friend of mine had signed up to serve on a mock jury and told me about it. I called and got the last slot. Under the wire. The organization putting on the mock trial was the National Institute for Trial Advocacy (NITA) located right here in Boulder, Colorado. It’s an organization that trains lawyers, and one of the training programs is to put on mock trials.


When I showed up and after being plied with sweet rolls and fruit, I was assigned to a room for the trial. Two teams of two lawyers each represented the plaintiff and defendant in a civil litigation case over a contract dispute. One company had accused another of violating a contract clause on exclusivity of technology. The defendant claimed that the exclusivity only applied to improvements to the original product and not a new product. So one item of dispute was whether the follow on product was an improvement or a completely new product. Then a second issue was over a right of first refusal. The company providing the technology had to provide the other company an opportunity to meet or exceed any offer made for a new technology. The technology provider contracted with another company, notified the licensing company, that company responded, but there was a dispute over whether this response met the offer or was a counter offer.


All this may sound boring, but since I negotiated contracts in the high tech world for a number of years before I retired to write mystery novels, I found the debate interesting. The lawyers presented their cases and called witnesses. The scenario was well-crafted in providing a situation that was not clearly in favor of one party or the other.


After the case was turned over to the jury, we discussed it and voted. A civil case requires a majority not a unanimous jury as in a criminal case. We voted for the plaintiff, deciding that the second product was an improvement and not a completely new product.


Then we had an opportunity to give the lawyers feedback. How many times do you have a chance to critique an attorney? They listened and took our feedback. But, hey, that’s why they were in the program—to become better lawyers. Much like we writers seek feedback from our critique groups. It all helps us improve.


An enjoyable day. I learned a lot, had a free lunch and even got paid for my time. Quite a concept—being paid to learn, while the lawyers were paying big bucks for their opportunity to learn.


Have you ever been on a jury and if so what was your experience?
Posted by Mike Befeler, author of geezer-lit and paranormal mysteries at 5:00 AM No comments:

Cooking Up a New Type of Mystery Novel: Combining Geezer-lit and Paranormal Mysteries

For you chefs out there, do you enjoy cooking up  new recipes? In the world of writing I like trying different flavors. My main course has been geezer-lit mysteries with the five books in my Paul Jacobson Geezer-lit Mystery Series.

Then I tried a zesty side dish of paranormal mystery with The V V Agency.


Now I'd like to offer up for desert, a paranormal geezer-lit mystery titled, The Back Wing. Widower Harold McCaffrey moves into Mountain Splendor Retirement Home with a group of strange residents -- witches, vampires, werewolves and shape-shifters. He bonds with his fellow denizens, especially the beautiful Bella. Things are looking up for Harold -- until he and Bella must use all their normal and extra-normal skills to solve two murders in this very unique retirement community.
As Edgar Award winner Rex Burns days, "Where else could one enjoy the image of being gummed on the neck by a toothless vampire with dementia?"
Enjoy! 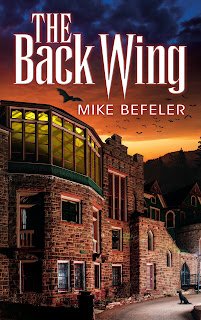 Posted by Mike Befeler, author of geezer-lit and paranormal mysteries at 2:41 PM No comments:

Back on the Streets Again

On Monday, I was out on the streets again as a panhandler. Well actually I was in the auditorium of the Boulder High School auditorium reprieving my role as an aggressive panhandler to help train new Boulder police officers.


I attended the Boulder Citizens’ Police Academy a number of years ago and now participate in an alumni group that provides role-players for police training. I’ve been a hostage, hostage-taker, drunk, assaulter, bombing victim to name a few of the roles I’ve played.


In preparation, I received a driver’s license that had been confiscated from being in the possession of the wrong person, probably from having been used as an ID for an underage drinker. I had my hand drawn sign and then awaited the arrival of a trainee. Police dispatch signaled the trainee that a complaint had been made of an aggressive panhandler. When the officer arrived, I held up my sign and asked him for five dollars multiple times.


Boulder allows panhandlers but they have to back off after being told no once and can’t aggressively confront or touch someone. I acted insistent and obnoxious enough that I received a citation for aggressive begging. I would then need to appear before a judge and potentially be fined $250.


Over the course of the morning I put on my act four times, each time receiving a citation and once being handcuffed in preparation to being carted off to jail, because I refused to sign the summons and indicated I would not show up for the court date.


This is the second time I’ve played this role, I’ll have to be careful not to be type cast. The picture shows me with my sign outside police headquarters. 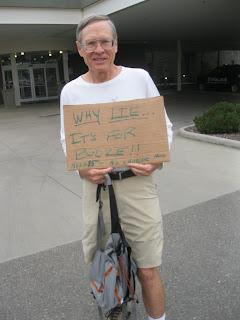 Posted by Mike Befeler, author of geezer-lit and paranormal mysteries at 5:00 AM 2 comments: