I returned last night from the Malice Domestic Conference in Bethesda, MD. This is a conference for fans of the cozy type of mystery novels. The guest of honor was Jan Burke shown below being interviewed by Dan Stashower. 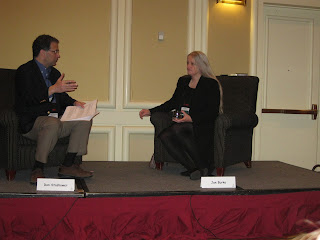 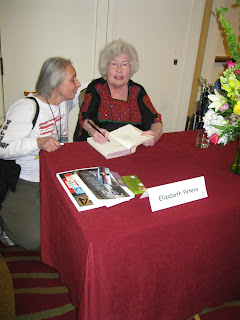 Parnell Hall dressed up as one of Elizabeth Peters’s characters and is here with fellow Rocky Mountain Mystery Writers of America author Beth Groundwater and me. 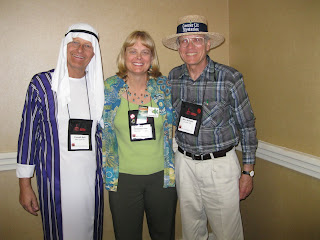 A few snippets from speakers:
- Dana Cameron stated that she “gives herself a chance to try something new.”
- Lee Goldberg is an advocate of e-publishing but warns that it can be too easy for unedited books to become a “Tsunami of swill.”
- Donna Andrews advocates “research by wandering around.”
- Margaret Maron stated that “needed killing was a very good defense in North Carolina.”
- One speaker said, “The difference between a writer and an author is perseverance.”
- In describing the interest in paranormal mysteries, one author indicated, “Everyone wants a little magic in their lives.”
- Luci Zahray, know as the Poison Lady, gave a talk on alcohol poisoning.  A chronic alcoholic if cut off from alcohol will die and needs about four days to go through a detoxification process to avoid death.
Posted by Mike Befeler, author of geezer-lit and paranormal mysteries at 6:31 PM