For the last day we’ve been watching the smoke plumes from the fire in the foothills above Boulder. Today I had a chance to see the progression of the fire when I took a hike on open space to the east of the mountains. Smoke was visible in Shadow Canyon behind the Devil's Thumb rock formation: 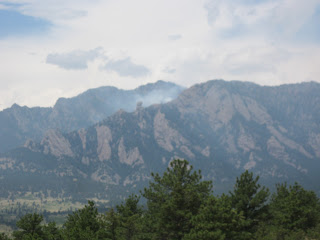 While watching, a slurry bomber dropped retardant in Shadow Canyon: 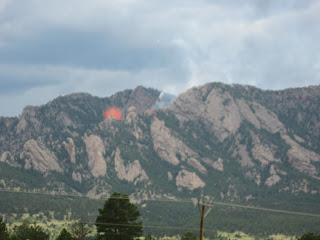 A little while later there was another drop on the top of Bear Peak where the fire had breached the top of the mountain: 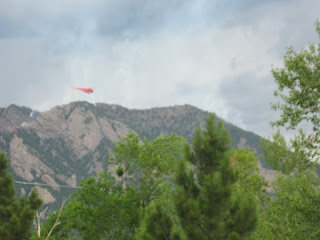 Right now there is a thunder storm passing through. This is bringing some needed rain but also the risk of additional lightning strikes. I got some writing done today, but I have to confess it’s difficult to concentrate with the threat of fire so close to town.
Posted by Mike Befeler, author of geezer-lit and paranormal mysteries at 4:00 PM